Oktoberfest in September at Youngsan Base. 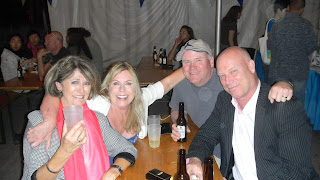 Our neighbors, Becke and Mike Ferris, had their last evening in Korea and we spend it together celebrating it in a typical German way, Oktoberfest.
Not so strange that it’s several days of celebrating if you think about how many US Military have served in Germany.
We felt as if we were in Bayern, with the exception of the high outdoor temperature, with Sauerkraut, Appfel Korn, Bier und Wurst.
A fabulous atmosphere was created which made the saying goodbye a bit easier. 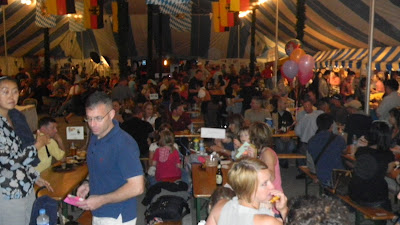 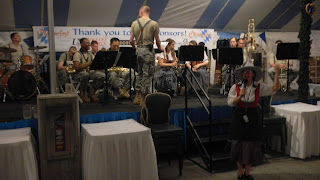 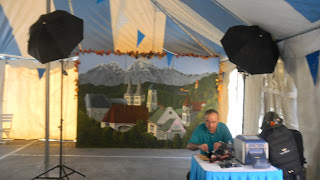 Picture yourselves in a picturesque German village! 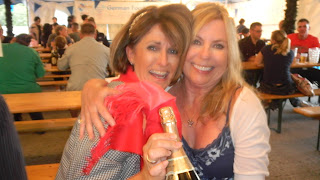 He had not forgotten how to waterski! 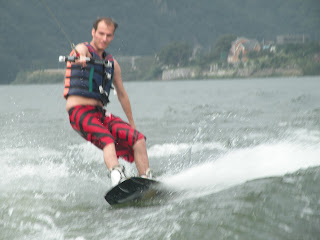 Last Thursday the Swedish delegates and their family members, over 18 years, celebrated “kräftskiva” (crayfish party, marking the end of summer). This gives a fabulous opportunity to sing together while drinking different flavors of snaps. 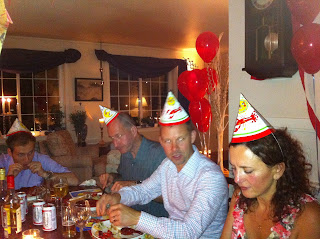 The ten of us enjoyed the traditional Swedish Crayfish Party
Vincent was dragged from the National museum to the War Memorial to several different markets. We’ve been playing golf at Sun Nam GC and wakeboarding at the Han River. He has been driving trough Seoul enjoying the sights and the very different driving style of the Koreans. Twice he joined me at Zumba and was invited by General and Anne Macdonald to the RR club for dinner and wine tasting. Sang karaoke and was at the Fall Reception at Panmunjom but we did not manage to got up to Seoul Tower by night enjoying the impressive view. Something left for his next visit! 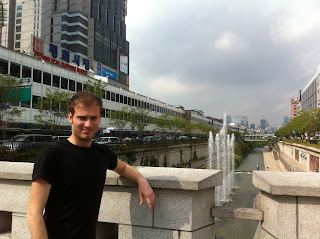 I wish him a couple of days off when he returns to recuperate, but no; tomorrow he’s back in Sweden and starts working the day after, nice with being young and strong. I will need to take a day or two off, mainly to remembering the wonderful swift disappearing days I had having him here. 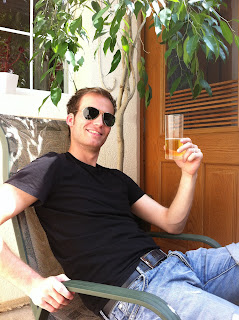 So long Vincent, we enjoyed having you over at our place at Youngsan Base!
Upplagd av Unknown kl. 12:34 No comments: Länkar till det här inlägget

After picking Vincent up late Tuesday afternoon (took more than an hour from arrival until I could embrace him) we drove to our home at the base. Travelling back in heavy traffic was already an adventure and we or better said I made some wrong turns 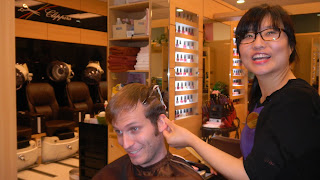 We had a late dinner and late night, so I let him sleep in, while Anders went to work and I to Zumba and Pilatus. Upon my return he woke up we had brunch and went off for him to have a badly needed haircut. This was appreciated not only by Vincent but also Unna, my hairdresser. 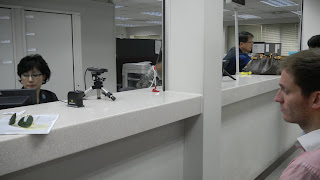 We had a swift procedure at Camp Kim for his two week permit stay at the base and afterwoods I showed him some of the many facilities on base.
The following day he went with Anders up to the DMZ and got the full brief regarding the situation between North- and South Korea. Saw Camp Bonifas, Tunnel 3, Swedish - and Swiss camp, Conference Row and more. Something everybody visiting this country should see.
He joined us at the Change of Command Ceremony and following reception for Commander of US Naval Forces Korea RADM Peter Gumataotao.
And in the between time, we also managed to go to the tailor for a nice suit and several shirts. Also Mr. Bob got engaged, for a pair of handmade shoes, while we had a walk about on Itaewon. On Saturday time for a fast visit to Namdeamun then quickly back home to prepare for the “kräftskiva” at our home. This will be posted next time………………..

Waiting in line to say farewell. 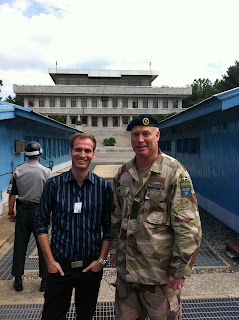 Father and son at Conferance Row 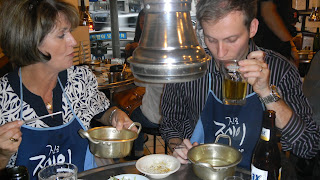 ﻿
And ofcouce a night out at our favorate restaurant!
Upplagd av Unknown kl. 18:30 No comments: Länkar till det här inlägget

Six month in Korea, celebrating at “our” restaurant!

I have hard to comprehend that we’ve been out here for half a year. During this time we’ve enjoyed many fantastic moments. Got an insight on Korea, the culture and mentality. We've encountered many fabulous people from all parts of the world and experienced weather the peninsula hasn’t seen for over a century; heavy monsoon period followed by enourmous down poor costing many human lives. Then of cause the normal weather conditions as well with several typhoons, heat and high humidity.

You all have been able to follow the many things that we've been doing, experiencing and the fun we've been having.
However, everything put together I can say it’s not just a dance on roses and of cause the main part of that is missing our children, family and friends.

You all reading my blog and sending some comments are highlights during the week, thank you for that!
Nevertheless, some celebration was in place, so we took the subway to Namyeong Station, 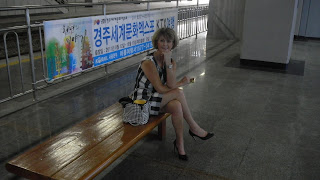 which is situated close to the hotel we stayed when we arrived in Seoul in March, to have our favorite Korean dish:  Bulgogi. 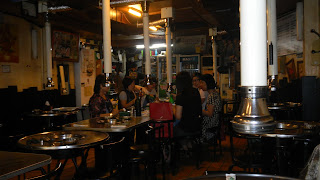 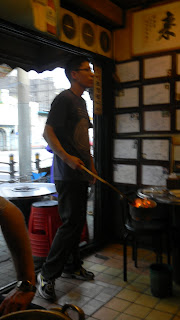 The owner recognised us (not too hard for we're the only "spetsnoses" there) and with the little English he knows combined with the even less Korean we know, served us the food and drinks we wanted. 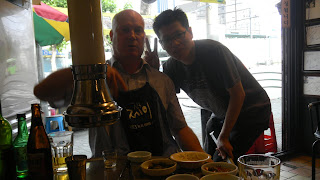 The Korean chopsticks, made of metal are more difficult to eat with than the Chinese ones. However, after six months we manage perfectly everything; Anders here eating spareribs and I a fried egg :) 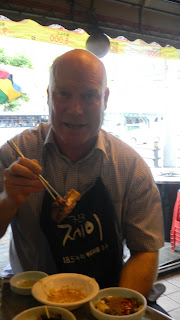 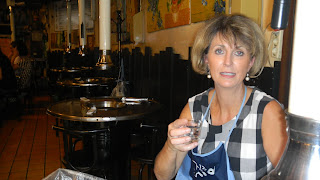 Soju﻿, the most popular Korean alcoholic drink, was of cause ordered. 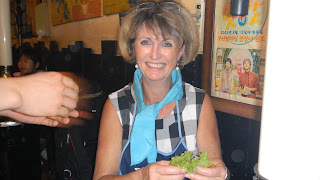 An ice-filled scarve was putted around my neck, did it really show so clearly that I had a hot flash? Probably!
Upplagd av Unknown kl. 07:16 1 comment: Länkar till det här inlägget